Donald J. Trump owns 17 golf courses around the world. The former US president owns more than ten in the US alone. Trump’s love of golf is no secret, and neither is his continued expansions into the financial business of the game. But is Donald Trump a good golfer?

While owning the course does give Trump an excellent excuse to commit to more practice time, has any of that practice paid off? Has his love of the game equal to his talent? You will find all the answers in this article!

Trump as a Golfer

It might be unfair to compare Trump to some of the world’s greatest golfers, but Trump has claimed to have won every championship at the courses he owns. With a winning streak like that, Trump must have remarkable skills, right?

Trump has claimed scores in the low 70s at the Winged Foot Golf Club in New York, which is well known as a challenging course. Notably, the pay score at Winged Foot is 70. Geoff Ogilvy won the last US Open hosted at the club with a score of five over par.

Trump considers himself an instinctive golf player. While the hips are a factor, most of his skills are unstudied. His ball-striking is Trump’s greatest asset as a golfer.

Tiger Woods has been a long-time acquaintance of Trump, and they’ve shared the fairway more than once. While Woods has never commented on the former president’s politics, he has stated that Trump has a strong swing and a long drive for his age.

Jack Nicklaus has played with a few presidents and has called Trump the best of them. He also described Trump as playing “a little bit like I do.” Nicklaus describes Trump as a good player who likes to play the game but doesn’t finish many holes.

However, while the endorsements of Woods and Nicklaus have weight, neither of the recognized world-renowned winners plays with Trump competitively. With no stakes and no egos to bruise, neither man has encountered Trump’s reputation as a sore loser.

Aside from his skills, Trump is also considered a poor sportsman. He is neither a gracious loser nor a humble winner. At West Palm Beach in March 2021, he was caught on camera smashing his club after a disappointing swing. As a golfer, Trump has repeatedly shown his true colors. It’s no surprise then that nicknames like “Pele” and “Commander-in-Cheat” have stuck like glue.

What is Donald Trump’s Handicap?

The official USGA handicap listed for Donald Trump is 2.8. Still, experts like golf writer Michael Bamberger (Golf.com and Sports Illustrated) peg him as a 9 or 10. Trump doesn’t log many scores, which is part of his strategy to improve his overall record.

Sportswriter Rick Reilly has noted that the math doesn’t add up. With “more than 150 visits to his golf courses since taking office, Trump has logged only one round in the online USGA Handicap Index—and a 96 at that.”

With Trump reporting unbelievable scores, such as a 68 on a course rated 75.3, it’s challenging to trust Trump’s record. Most of his counting scores are decent, but he leaves long time gaps between what counts and doesn’t.

Trump won most of his club titles at courses he owns. Trump “wins” by deciding that the opening day, when he’s the lone golfer, counts as a club championship. With no competition, it’s easy to take the title.

Is Donal Trump a Cheater in Golf?

While we can answer that question with a simple three-letter word (hint: it starts with ‘y’), you might be surprised by how Trump does it.

You might already be familiar with Rick Reilly’s book Commander in Cheat: How Golf Explains Trump. Reilly’s take on the game is that “Golf is like bicycle shorts. It reveals a lot about a man.”

Rick Reilly began his career as a sportswriter in 1979, from the back page columnist of Sports Illustrated to his show on ESPN Homecoming with Rick Reilly. He knows what he’s talking about, and he isn’t afraid to take an honest look at Trump’s history.

The book is mainly an inspection of Trump’s golfing tactics, on and off the green, contrasting with his political game. Reilly interviewed 100 golf pros, amateurs, developers, and caddies and shared their experiences with Trump’s golf game.

Reilly also shares his personal experience as Trump’s caddy. Despite being a well-known entity, Trump introduced Reilly with a revolving door of fabricated accolades.

The narrative doesn’t deliver a lot of praise for Trump’s skills, except for his cheating talent. But the game itself isn’t the only target of Reilly’s book. Reilly dives into etiquette on golf courses and Trump’s claims about the business side of the courses he owns and operates.

Reilly’s perspective showcases how Trump treats scores and facts as opinions easily altered into something better. The Commander-in-Cheat “stiffs his golf contractors,” making his lies more devious than an ego boost.

The opening chapter sets up Trump’s strategy from the first title: The Big Lie. With a claim of winning 20 Club Championships, despite evidence to the contrary, Trump never backs down. The key to winning for Trump seems to be simple: saying it makes it so.

The “Trump Bump” is a tactic Trump uses to decide an outcome that paints him in a favorable light. The facts of the score don’t matter. Instead, the score he reports does. If the actual score was 72, it might be 70 when he mentions it five minutes later, or 68 an hour later.

At Winged Foot Country Club, caddies bestowed the nickname “Pele.” The name comes from Brazilian-born soccer player Edson Arantes do Nascimento. It’s not Pele’s talent as one of the world’s greatest players that they’re comparing: it’s kicking the ball.

If you ask Trump, he will state that he’s never kicked his ball back onto the fairway. However, it doesn’t count as a lie if caddies or secret service members move it for him.

Trump also hits invisible balls. If he believes other golfers are far enough away, he’ll take a swing and walk over to where he wants to place a ball.

A clever trick of Trump’s is to strategically place golf carts and other obstacles between himself and other players to block lines of sight. If no one can see him, he can drop the ball in a suitable spot. Trump plays with an ace up his sleeve. In this case, an extra ball.

A famous example of Trump switching balls is his most recent club championship win awarded under unusual circumstances.

Ted Virtue, CEO of investment firm MidOcean Partners, had won the 2018 club championship while Trump was out of the country. When Trump returned, he insisted on playing Virtue for the title.

However, reports taint the strange win further, as the first ball in the hole belonged to Virtue’s son.

The nine-hole match for the co-title was an ambush. Virtue and his son had been playing when Trump appeared. While Virtue initially declined in favor of continuing his father-son game, Trump coerced the duo into joining.

During the match, Trump’s original ball had landed in a pond, but that didn’t stop him from lining up the ball closest to the hole. Virtue’s son protested, but Trump’s caddie agreed that the ball in the putting range was now Trump’s.

Trump often relies on gimme shots, deciding his undeniable skills would land the ball in the hole with one final putt. However, accounts suggest that Trump takes advantage of gimme shots when it should be a chip shot.

So is Donald Trump a good golfer?

The answer to that depends on your definition of “good.”

There’s no argument that as a sore loser and exaggerator, serious players might consider him as a black cloud hovering over the fairway. As a player, based on his factual scores and what we know, he’s probably a good player.

But he’s not as great as he claims. 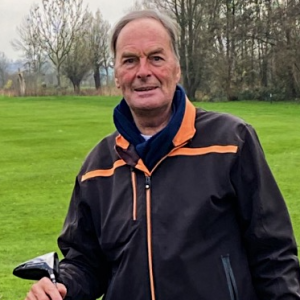 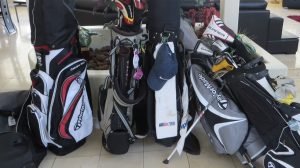 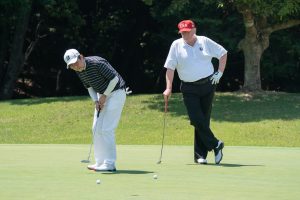 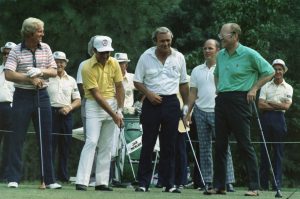 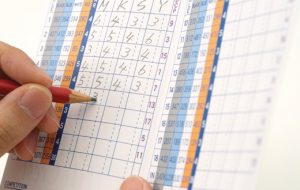 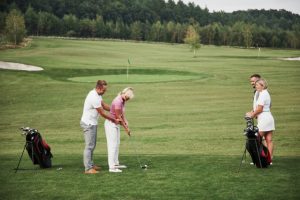